'Hop, Jump, Skip' has been a fantastic intervention with the locals in Folkestone.
Today I had two Nepalese young men who took part in the interverntion and described how they played the hopscotch game in Nepal. Omar became a bit homesick and excited as he explained the differences in the layout style along with the method and technique of the game.
Interdisciplinary artist Saranjit Birdi who was also in the Courtyard at Bouverie Place, doing his drawing intervention later told me that a group of grown men stopped and played hopscotch for a good while once I had left. Seems like Folkestone is a refuge for asylum seekers, all of the participants were male and have settled here without their families.
Later in the evening Dilwara Begum and I were walking along the promenade and came across a large group of Arab women who were over from Dubai and have been coming to Folkestone every year for the the past 37 years!! They said they were staying in England for over a month and a half as they dont like the heat in Dubai at this time of year. 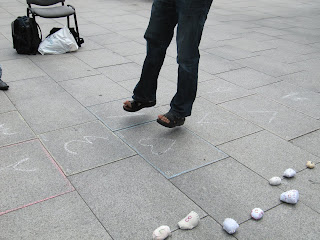